Motorcycles have a very slim profile and are thus convenient to maneuver in tight places. So some prefer them when on shopping errands in the city.

On such occasions, one thought that can cross your mind is whether it’s right to park motorcycles on sidewalks or not. In reality, very few motorists think twice about parking on just any available space. But that doesn’t make it right. 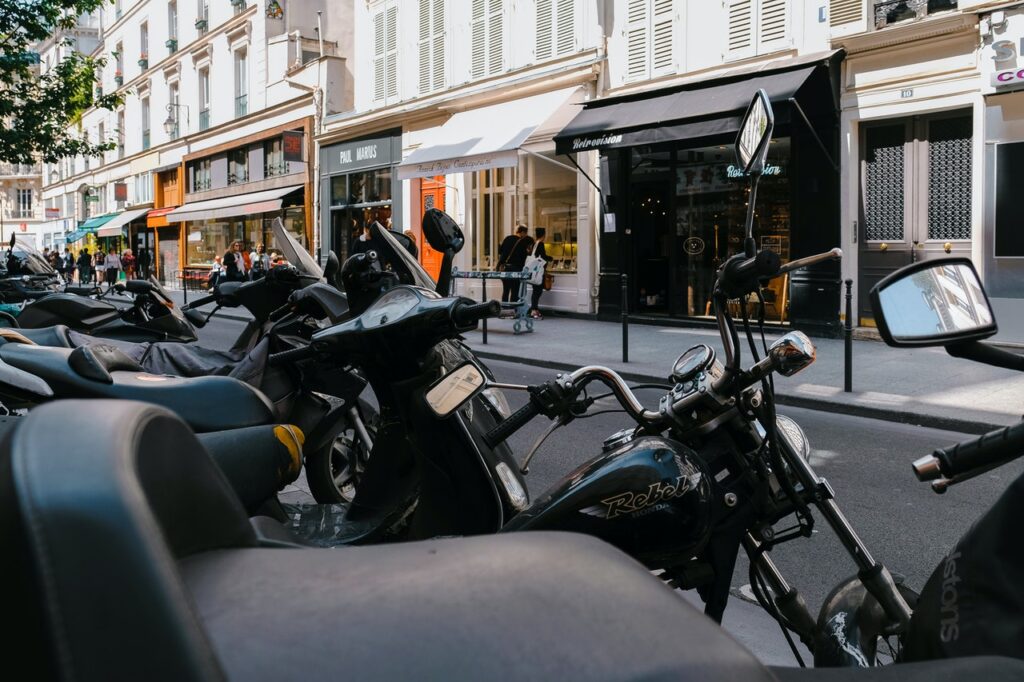 What Is a Sidewalk?

A sidewalk is a paved footway or footpath at the side of the road. Primarily it’s meant for pedestrians. Often you can find people with disabilities or young kids using sidewalks.

So, Can Motorcycles Park on the Sidewalk?

The rules and regulations in each state may vary on the issue. But many states don’t permit motorcycles parking on sidewalks. Doing so attracts a heavy fine, on the offender.

However, it’s common to find motorcycles parked on the sidewalk. Parking on such pavement is a big risk. You can’t get away from the offense all the time.

The only exception for parking a motorcycle on the sidewalk is on private property. But even in that case, you need the prior permission of the owner.

Parking a Motorcycle On a Sidewalk in California

According to California vehicle code 22500, it’s illegal to park a motorcycle on the sidewalk. Furthermore, it’s also prohibited to park a vehicle or motorcycle such that any part of the body protrudes more than 10 inches into the sidewalk.

Nevertheless, you may find some municipalities relaxed in enforcing the rule. But it’s always safe to follow what the traffic laws stipulate.

Reasons Against Motorcycles Parking on Sidewalks

Though it’s tempting to do so owing to the size of a motorcycle. And, sometimes you can be lucky to get away unnoticed. But you never know when you can attract a ticket for the offense.

Packing your vehicle or motorcycle on a sidewalk is very much likely to hinder traffic movement. That holds for partially or fully blocking the sidewalk.

Blocking the path causes inconvenience to the visually impaired, other pedestrians using strollers and wheelchairs. And that may attract a hefty fine.

Despite many motorists supporting the partial blockage of the footway, it isn’t safe. Often the act may arouse the anger of some pedestrians passing by the motorcycle and thus prompting them to carry out an offensive act. Also, kids passing by or playing on the bike can easily cause an accident.

A Property Owner Can Within Minutes Contact the Police and Serve You with a Ticket.

Parking on a privately owned sidewalk may seem non-offensive, especially on a large and an established business premise. If you don’t seek the consent of the owner a simple phone call to the police by the businessman will see you pay a fine.

Can Motorcycles Park in Front of Stores?

For privately-owned premises, you are at the mercy of the store’s management. Parking there may land you a parking ticket or go unnoticed. That’s why it’s wise to seek permission from the manager before parking.

The truth is unless the store has a designated area for motorcycle parking, you will be risking a lot. And if you have his permission park wisely and stay away from the fire zone.

So, Where Can You Park Your Motorbike Safely? 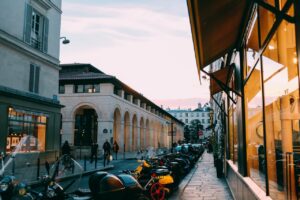 If you need to park your motorcycle, then look for an area where it’s legal to do so. One such area you can count on is the public bike rack. Then lock it safely. Alternatively, look for a garage owner that’s operating a car and bike parking business.

Further, you can also park your motorbike in the usual car parking lots; for it’s legal to do so. Though, some car drivers look down upon motorcycles parking alongside vehicles. They claim motorbikes don’t make use of optimal space usage.

On the same note, park in a manner that an approaching car seeking to use the same parking space can see the bike. In other words, let the back tire stick out slightly without over protruding.

And when parking a motorcycle along the street, ensure that the back tire makes contact with the curb. And in the case of sharing parking space (more so parallel parking), let the hind tire make an angle with the curb. That way getting out will be easy.

So, can motorcycles park on sidewalks? In most places it’s illegal. Unless the owner of a store or business premise allows you to do so on his privately owned footway.

Most motorcycle drivers knowingly or unknowingly park on sidewalks, but still, it’s illegal. It can cause you a heavy fine just when you don’t suspect it.

Therefore it’s wise to know what the traffic regulations require in your area and follow it strictly.

motorcycle enthusiast and editor at happywrench.com