What is glyptal you might ask?  Well, honestly, it wasn’t something I had even heard of until recently.  Apparently, it takes getting out and talking to other wrench heads to learn new things.

I am restoring a 1972 Harley-Davidson Shovelhead named “Cal.”  That particular bike was a perfect storm of oil leakage problems.  Harley had recently been purchased by AMF, and AMF wasn’t ready to retool the increasingly out-of-spec Harley-Davidson machinery.

Therefore, anyone familiar with that era of Harley-Davidson will tell you that those bikes are expected to leak.

Expectation is one thing.  Mandatory is another.  There is a way (several ways) to get those cases to stop leaking and that is where Glyptal and engine restoration come in.

Glyptal 1201 is the registered trademark name for a red enamel made by the Eastman paint company.  It is used to seal the rough interior surface of engine blocks (sealing tiny pores left after media blasting), essentially creating a “second skin” inside the engine walls. 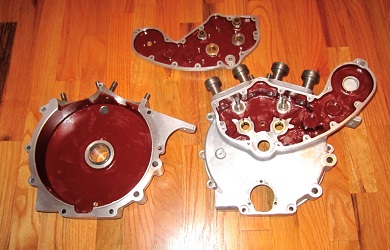 The surface to be sealed needs to be absolutely free of old oil and residue so it is important that media blasting is accompanied by boiling the parts or pressure washing them with boiling water.  It is important to get those parts to “sweat out” as much old oil as possible.

The red enamel is meant to be brushed on, but can be sprayed on via gun if thinned.

Finally, Glyptal 1201 was originally intended for coating coils, so it has good electrical insulating properties.

Bottom line is your vintage Harley may never be as “leak proof” as a Japanese crotch rocket, but there are some solid ways to improve its oil retention properties.  Glyptal is one of them.